It doesn’t matter how fast you go, or how slow you go, but that you start and finish the race.

That’s what I want my children to learn. This is something I remind myself each and every time I get out to run. I will be thinking about this when I return to the Boilermaker after a 17 year absence.

This time I have more than 2,000 friends and family all served by The Arc, Oneida-Lewis Chapter, who are motivating me to make it to the finish over at the West End Brewery.  I have three special reasons to be here: my triplets who were born at 28 weeks gestation: Gretchen weighed in at 1lb, 6oz., Theodore clocked in at a whopping 2lbs, 10oz, and Olena came in at 2lb, 4oz.

But this morning when I lace up my shoes and hit the road my son, Theodore, will be with me. His laughter is contagious. His smile lights up the room. He loves music and often hums favorite tunes! He will take you by the hand and steal your heart –guaranteed.

And when I think of how far the triplets have come, how they spent 3 months in the Neonatal Intensive Care Unit at Crouse Hospital in Syracuse, fighting off tubes, and wires, and isolettes – it makes each and every mile – good or bad – seem like a piece of cake.

I had taken up running because of so many reasons. I love to feel the wind in my hair and always felt so strong and powerful after completing a mile or two. If I’m having a bad day or a good one even, I always feel so much better post run. I also made a promise to myself while I was on bed rest that I would run again.

And now I have a new purpose: I run for Theodore. This is something that does not come easy for him.

My husband and I were overwhelmed, to say the least, when we found out after trying for so long that we would be welcoming triplets into our lives.

And then, when they were approximately 1 ½ years old a therapist who had evaluated Theodore on a return visit to the NICU told us “you son is on the autism spectrum.”

We always knew Theo was different. At first, Theo came home on oxygen therapy and a sleep apnea monitor. We were told to expect delays with him. When his delays became more prominent, we knew we had to do something.

The therapist’s diagnosis was confirmed by a developmental specialist shortly before his 3rd birthday.

Fast forward through diagnoses, appointments and specialists, meetings with school district personnel and therapists, sleepless nights and days when nothing goes right at all, watching as your son is over stimulated (or under stimulated) and has a complete meltdown: it can be so overwhelming. Sometimes we just have to step back, and think about what we can do positively to get the word out about autism, and specifically about what a treasure my son is. So, for me, joining the Boilermaker’s Charity Bib Program was a no-brainer!

Even though Theo is non-verbal, his actions speak volumes. And we wouldn’t be where we are today without the support we have received. While we are not directly part of the The Arc, Oneida-Lewis Chapter (we live in Canastota, Madison County), I thought I could at least bring some attention to this great organization that is making strides for so many people in the Central New York area. And the bib program was rolled out around the same time that Governor Andrew Cuomo announced 4.5 percent cuts to services for people with developmental disabilities.

The Arc not only helps individuals impacted by autism and other related disorders, but also helps the families cope by providing services for the family members they love so much through related therapies, social group settings, and more.

When I lace up my sneakers I take on the world for my triplets. When the going gets tough, I think about all the things my kids have overcome. I am especially overwhelmed by the things Theodore is doing. He is beating the odds. He is trying his best to communicate. And with the ARC’s help, Theodore and more boys and girls – and adults – like him, will be people first, autistic people second.

The Boilermaker Charity Bib Program allowed the Friends of the Arc Foundation to raise $3,000 through the sale of Boilermaker bibs for those running the 5k or 15K in July. Thank you to Tim Reed, race director, and the entire Boilermaker Road Race Team for making this possible! 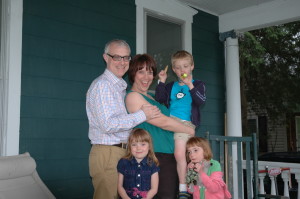 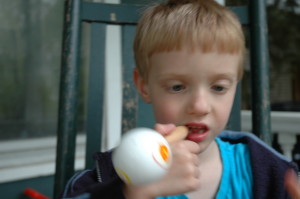 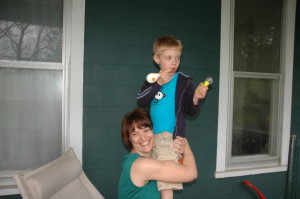